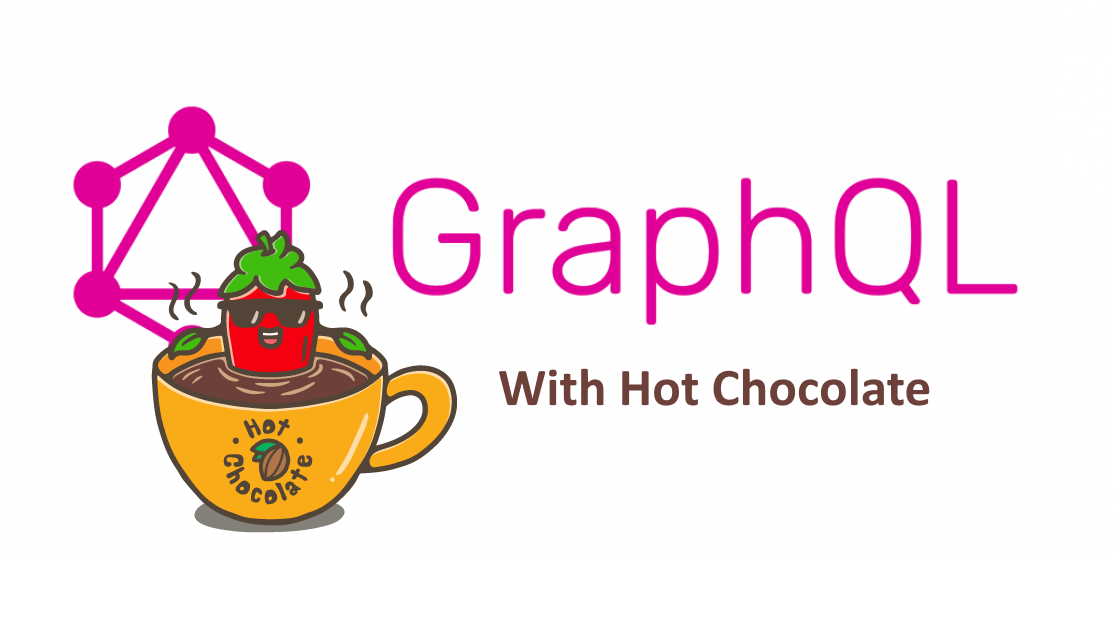 Starting my journey with GraphQL

Up till now, I've always heavily relied on RESTfull services to power API's, this recently got widened with GRPC which you can read about in my article .NET & GRPC What they forgot to tell you. GraphQL was the third final frontier that needed exploring 🥾...until now.

Having looked at it a year back the implementations for .NET were in their infancy, which meant that your server would only be as good as the framework you choose. Fast forward to 2021, Chilli Creams Hotchocolate has gained some serious ground and makes GraphQL an appealing proposition for developers.

In this article I hope to cover two main points,

Let's paint the scene, your a backend engineer who's creating an endpoint for showing a list of cats. With your battle-tested REST knowledge, you set out to create your first basic endpoint in the CatsController that returns all cats and the front end engineer is ready to integrate it into his UI.

The app soon becomes a hit! your product manager decides to expand the functionality to filter by cat descriptions and to create a new cat information page. Getting to work you expand the endpoints for the front end engineers to use.

The cycle continues with product owners coming up with more feature requests and at the bottom of the pile, you got the backend engineer being reactive to all the changes. By the time you've wrapped up the project your left with a code smell of 10+ endpoints 💩.

The situation further degrades after a year when the UI gets redesigned and features are culled based on user usage. You end up with random floating endpoints because quite frankly no one audits their endpoints for dead code.

This is where GraphQL steps in, it switches the responsibility of an engineer from anticipating and creating endpoints to simply upfront displaying everything that's available with declarative meaning.

Hot chocolate is one of the leading implementations of a GraphQL server, one important thing to note when choosing a framework is that your implementation will only be as good as the framework you choose. As the GraphQL specification progresses you want a framework that keeps up to date with the changes... Hot Chocolate does that.

To understand the basics of Hot Chocolate I recommend Les Jackson's free course on youtube. It is a bit lengthy at 3 Hours and 45 Minutes but it allows you to create an ASP.NET implementation from scratch and understand basic concepts like Querys, Mutations and Subscriptions. By the end of the course, you have a GraphQL service that can do CRUD actions (do 👍 his video it's great!).

The source code he produces can also be found on his github repo. The source code is a great starting point as it creates a docker image containing an MSSQL database. The solution itself already has Entity Framework and Hot Chocolate bootstrapped, with two entities to test with.

On top of this Banana Cake Pop 🍌 is also integrated which allows you to query your server through a browser (similar to swagger).

As well as GraphQL Voyager 🚀 (do checkout the live demo).

To understand the remainder of the article it's important to have some basic knowledge of Hot Chocolate.

Whilst this is an addition to what's being discussed, it's worth briefly mentioning. Voyager helps facilitate the move of a backend engineer from creating and documenting prescriptive REST endpoints to simply becoming a harbour of documentation and entities.

Here's a taste of what is looks like for our API, 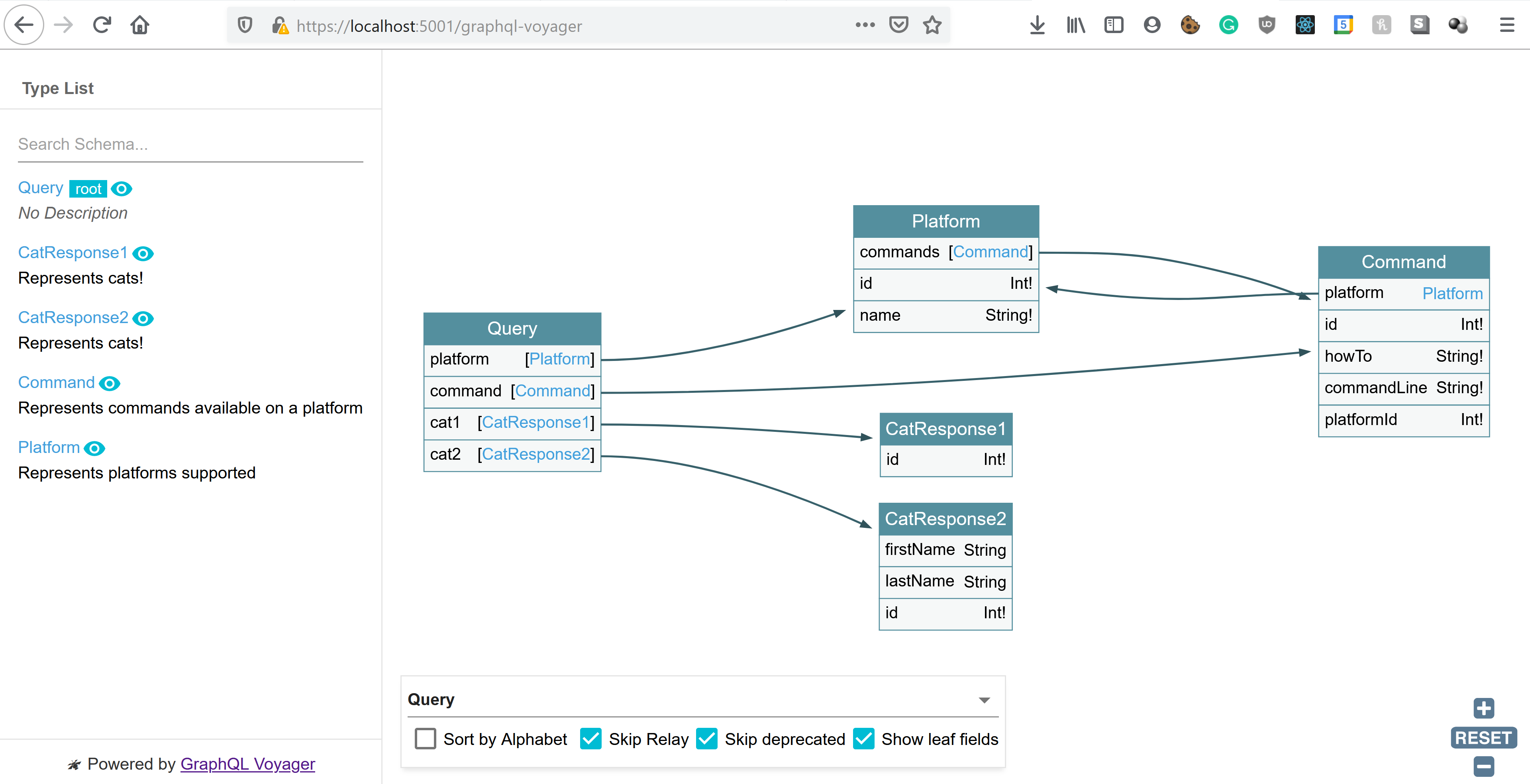 What they forgot to mention

Up till now what we have discussed fits the 80% CRUD usecase, however as we know API's that are in the wild also deal with a range of other responsibilities. The remainder of this article is to shed some light on how this is done.

How to version your API

The typical versioning strategy for REST is to version using URLs https://api.cats.com/v1 (when developers can be bothered). However with GraphQL as your only ever posting to a single endpoint that strategy is no longer a prefered solution.

While there's nothing that prevents a GraphQL service from being versioned just like any other REST API, GraphQL takes a strong opinion on avoiding versioning by providing the tools for the continuous evolution of a GraphQL schema. Taken from GraphQL Best Practices

Before we begin on how to version, there are some distinct points to note.

Non-breaking changes can continue as they would with REST, adding properties to entities (as you would with response models in REST), continues to be a way to evolve your API. Similarly adding new query types to your GraphQL server is also deemed as a non-breaking change, and is equivalent to adding new endpoints in REST.

GraphQL aids in breaking changes caused due to nullability as everything unless specified is treated as nullable. This leads to upfront resilience on the front end to missing data, the id: Int! in the example below cannot be null.

Eventually, we do still hit circumstances where a breaking change is needed. In these situations we have two strategies. The first as Chilli Cream Docs specify is to add deprecated flags to old properties and begin to shift usage to new versions.

For client developers, this then creates warnings when using a deprecated property.

Whilst this approach works over time it could create a lot of noise if you have many deprecated properties, an alternative approach is to split the entity entirely, use different classes between the two versions. Here is an example, we start by creating two query types,

Both of these would contain their own Code First type files

The final piece of code is to use the intermediary response models. Under the hood we are still using the same EF entity.

These changes now allow us to split our models, the two can be queried independently.

How to do Authentication

Since Hot Chocolate works on top of ASP.NET we can leverage on all the traditional Authentication pipelines we use for REST, nothing changes! To demonstrate this I'm going to extend the base implementation with a basic authentication mechanism using a header value x-api-key and a key defined in the appsettings.json.

To begin let's first add basic app settings to hold our authentication key (this represents the key the client will pass to the server to authentication their request), and create a class to deserialise into using IOptions interface.

Next we will create authentication scheme options as follows,

The next part is where the crux of the code is, the AuthenticationHandler is what determines whether the request was correctly authenticated. On a successful attempt, it populates the ClaimsPrinciple.

The final part need is to register this in our startup class, below are the two bits of code needed. Once we have this in place the [Authorize] tag will work for regular REST requests, any request sent without an x-api-key value of 'secret123' will be rejected. The next step is to see how we replicate this in GraphQL.

Authentication in GraphQL works by authorizing individual models, to begin we first need to add the HotChocolate Authorization package HotChocolate.AspNetCore.Authorization and enable it in the Startup.cs class, its a one-liner,

Now similar to the [Authorize] tag we use for REST we can enable Authorization in for our individual ObjectTypes by adding a simple descriptor.Authorize() call.

Once this has been added making calls without the header will return an unauthenticated result that looks like this,

How to do Authorisation

Extending the code to work with Authorization is also a quick change, in this example we will authorize based on the user's role. To begin we will extend our ApiKeyAuthenticationHandler to populate a claim when the authentication key has matched,

Next we can pass a list of accepted roles into the ObjectType CatType1, in this example I have intentionally added a role that doesn't exist.

Making a request now will spark an unauthorized error,

How does logging work

Regarding logging Chilli Cream has created a guide to adding an AddDiagnosticEventListener that's able to trace incoming requests, check out the article Log Your Queries While Building a GraphQL Server. It would be interesting to create an example that's OpenTelemetry compliant... perhaps that's one for another day (this articles getting a bit long 😩).

That's it folks! We've seen that the Hot Chocolate implementation nicely fulfils not just the 80% crud use case but can also deal with the other responsibilities we typically see with our REST services in the wild.

.NET & GRPC What they forgot to tell you